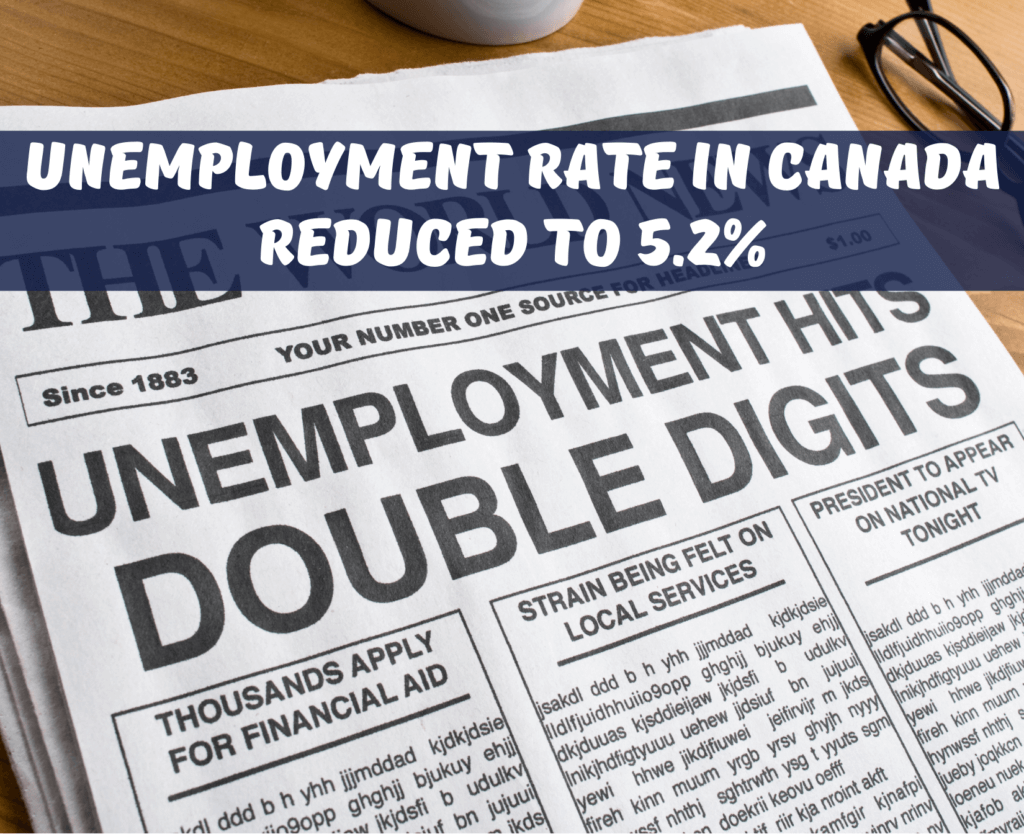 The unemployment rate in Canada has once again reached an all-time low. According to Statistics Canada, it dipped to 5.2 percent in April, down from the previous high of 5.3 percent in March. The unemployment rate for adults aged 25 to 54 is considerably lower, at 4.3 percent, the lowest level ever recorded since comparable data started available in 1976.

In April, the jobless rate among immigrants fell to 5.5 percent, down from 5.8% in March. It occurred in each of Statistics Canada's three immigrant cohorts. It dropped from 8.3% in April to 7.8% among immigrants who obtained permanent residency during the last five years. It declined to 5.8% from 6.3 percent in March among immigrants who obtained permanent residence between 5 and 10 years ago.
In April, it was 4.6 percent among immigrants who had been in the country for 10 years or more, down from 4.8 percent in March.
Overall Canada has a historically high job vacancy rate with over 800,000 unfilled jobs. As a result, the federal government and provinces across Canada are attempting to relax the laws governing the Temporary Foreign Worker Program (TFWP).

Alberta, for example, stated earlier this week that it was lifting all occupations from a previous "refusal to process" list that barred firms from recruiting foreign workers in occupations where there were labour shortages.
In response to Canada's record low unemployment rate and unusually high job vacancy rate, the federal government loosened its TFWP restrictions in April.

In order to meet its labor force needs, Canada is also trying to welcome additional immigrants. Canada plans to admit around 430,000 immigrants per year under the Immigration Levels Plan 2022-2024, with the majority of them falling into the lower economic class.
Express Entry is the primary method used by the Canadian government to welcome low-income immigrants. After a brief break in invitations to the two main Express Entry programs, Immigration, Refugees and Citizenship Canada (IRCC) recently announced that invitations to all Express Entry candidates will resume in early July.
Beginning in July, it will strive to reduce the time it takes for Express Entry applicants to get permanent residence to six months.

Express Entry will re-emerge as Canada's principal economic class immigration pathway, which is one of the reasons this is big news. By 2024, Express Entry will account for one-quarter of all immigrant admissions in Canada, with over 110,000 immigrants admitted on the basis of their ability to contribute to the labor force.

HOW CAN ICC IMMIGRATION HELP YOU?

It has become hard to find jobs nowadays in Canada. Many are trying hard to find one. ICC Immigration has come up with plenty of job opportunities in various sectors like hospitality, health, and many more. If you wish to get a job you may contact ICC Immigration as we can help you solve this problem and get you a job as early as possible.